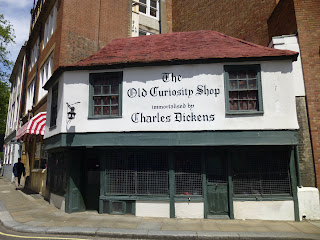 13 Portsmouth street or the old curiosity shop as it is known is a modest timber-framed building in Holborn London. It would have been insignificant and overlooked for most of its life, that is until that is it acquired the name ‘the old curiosity shop’. Soon afterwards it became very popular with tourists believing it to have a literature connection. It claims to be the inspiration of Dickens novel by the same name. This unfortunately is not true as It was also only added after the novel was released. It was a hoax by the shop owner who wanted to attract more business. The building has been used for many things over the years, it was a dairy in King Charles II reign, a waste paper merchant in the Victorian era until around 1900, a Antique shop and since 1992 a upmarket shoe shop. When it shut as a antique shop in the 1970's it was founded frozen in time with notes and receipts dating back to the 1920's.

It was built in 1567 with wood from old sailing ships. It has managed to survive the eighteenth and nineteenth century redevelopment of Holborn and the blitz unscathed. Although the building survived, much of the area around it has been redeveloped with the Holborn new road scheme which means that today the building is dwarfed by much larger and newer buildings. From an architectural point of view there is very little to describe, it is a simple two story timber framed building with an overhanging first floor and hipped roof. It is listed 2 * by English heritage due to its literacy connection with Charles Dickens.

This was one of the only survivors of the clearances from 1900-1905 for the new Kingsway road which passed straight through the area. Many buildings of similar antiquity were lost especially in the clearance of Wych Street . 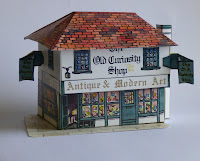 Get your very own model of the old curiosity shop at  http://www.englishvillagedesigns.co.uk/sheet-models-1.htm
Posted by Nostalgia at 16:46