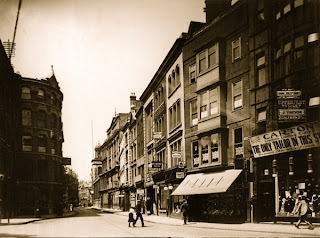 This building which stood on 74 Leadenhall street is an quite an enigma as there is very little record of its existence and its destruction. The building dated from sometime in the seventeenth century and was one of the many timber framed buildings built at this time. One of the few records we have is by architectural historian Nikolaus Pevsner who described  it briefly only in his introduction as one of the few timber framed seventeenth century buildings left in London. There is surprising little information about this building despite areas of interest, its age and also some distinguishing features such as the bay window and some interesting interior work. 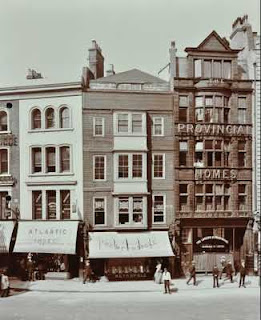 From various sources it appears that the building survived the Second World War and early post-war redevelopment. It is recorded in Pevsner's book which was published in 1957 and also in the image above dating to 1967. Intriguingly the brief description of the building is not altered in Pevsner's 1973 revised edition perhaps suggesting it was still surviving,  however this is uncertain. I would have thought such a building would have been conserved as late as the 1970's (although much demolition in Britain still continued at this time), however land value in the city was increasingly rapidly and it would have been fairly low density compared to a large office building its in place.


From street level the building is quite unnoticeable and admittedly isn't too handsome. The facade  must have been substantially altered in the nineteenth century when the brick work around the bay was perhaps constructed to its appearance in the image above ©. The bay looks original and is probably part of a older facade. Also the roof is slightly usual being hipped which may also indicate that the building is older than parts of the front facade. The interior of the building was noted for having a interesting ceiling of on the first floor, as a handful of images exist highlighting its interior, although they say little else about the building. Now in its place is a group of modern office buildings perhaps dating to the 1980's which may give an insight to when the building was lost.

left is an image of the interior showing part of the ceiling work. Source: The guildhall art gallery archives ©

Posted by Nostalgia at 11:48 No comments: 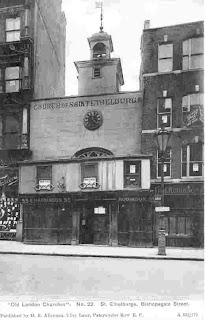 This ancient city church squeezed between two large office buildings on the busy road of Bishopsgate has been in existence for over 800 years. It was probably founded sometime in the 13th century and was dedicated to the Saxon abbess of barking, St Ethelburga the virgin. Some of the building dates to the 1390's including the main doorway arch. Above the doorway the large window is from the fifteenth century. In the later medieval period the church constructed a porch with a shop to raise funds for the parish, pictured left ©. The shop projected out into the street and obstructed the facade of the church giving it from the street a picturesque appearance. The shop was demolished in the 1930's for a road widening scheme. The entrance doorway can be found in the museum of London which dates to the fifteenth century. In several older images the church the building is depicted as having a spire on top of the small tower. The spire must have been demolished or destroyed before 1775 when a bell turret was added with a seventeenth century weather vane on the top.

The church survived the great fire and so made up a large cluster of medieval buildings around Bishopsgate (most redeveloped in Victorian period apart from churches of St Helena and St Andrews). The church also luckily escaped much damage in the bombing of the Second World War making it only one of a handful to have avoided destruction of both events.

Architectural Historian Pevsner uses the word 'humble' twice in his relatively small extract of the building in his guides. 'Humble' is however a very good description as it was indeed a very small church and smaller than most in the city. The church is a reminder of what many of the city medieval parish churches once looked like before the great fire which destroyed so many. The survival of the church is almost unique, most other surviving medieval churches are larger.

The interior was rather insignificant being as humble as the exterior. Of note were the Flemish fifteenth stained glass window as well as other English seventeenth century glass work (Both Lost). The inside of the church consisting of only a south aisle and a nave giving it a shape of a small rectangle. The church like many was restored in the Victorian era, although with mostly only the addition of furnishings. 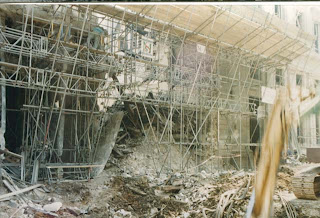 However despite so much history, this humble piece of medieval London was ultimately destroyed in 1993 in a massive IRA bomb left ©. The bomb reduced much ancient structure to rumble, only the south arcade and east wall survived intact. The church had survived the great fire, the blitz and redevelopment only to be destroyed in the modern era. It being destroyed so recently makes one think how the protection of our ancient buildings is not guaranteed. The bomb also damaged the nearby church of St Helena Bishopsgate as well as devastating much of Bishopsgate.

The story would have stopped there if some people in the church had got their way. They proposed to clear the site and sell the land for redevelopment but the discovery that the south aisle and east window survived and a public outcry led to the rebuilding of the church. In 2002 the long reconstruction project came to an end and the church was reopened as a centre for peace and reconciliation. Of the 3 million pounds it cost to rebuild the Clothworkers company contributed 1.2 million to the project. The rest of the money was collected from a variety of sources from individual donations to the heritage lottery. 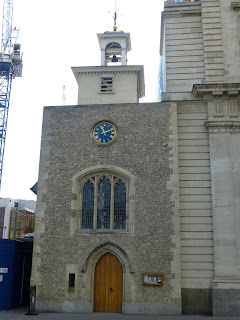 It was incredible that the facade was rebuilt closely to the original when these days architects like making great distinctions between the old and the new, in one proposal one of these architects wanted to replace the facade with glass but was quickly dropped due to its insensitive nature. The building today offers a haven in the centre of the busy and noisy commercial district, if not rebuilt the church would have only been replaced by characterless dull office block. It also helps to give a sense of the original scale of the street, where once the church was the tallest building it is now the smallest, the street being dominated by ever more high rise office blocks. left how the church looks today, a tribute to the determination of people to maintain the cities medieval heritage.
Posted by Nostalgia at 20:04 5 comments:

Southwark cathedral is one of London's oldest Gothic buildings and is one of the few churches in London of the early English style (only other example is the temple church which is of a transitional period). It began life as a priory founded in 1106 by two Norman knights known as St Mary's Overie, The latter part of the name meaning St Mary's over the water (to London). In 1212 there was a devastating fire and the priory was mostly rebuilt in the early English Gothic style. After the dissolution of the monasteries the church was renamed St Saviour and remained royal property until it was bought by a group of merchants in 1611. It was a parish church since the reformation and a cathedral since 1905.

The new London bridge of the 1830's played a pivotal role in the history of the cathedral. The bridge committee wanted to demolish the entire church and rebuild it smaller further west as London bridge was moved closer to the church. However, after much debate and persuasion the decision was finally taken to restore the church. Despite the church being saved it would lose much of its medieval fabric, first the lady chapel (to the east of the church) was demolished for the new approach to London bridge and also in the 1830's the nave was pronounced unsafe. By the early nineteenth centuey most of the church was in a poor state and at risk of collapse. Its savior was the young George Gwilt who strengthened the tower in 1818 and in 1821 restored the chancel and the retro-quire. The crumbling thirteenth century nave was in dire need of restoration, although it was decided to demolish it instead, using a unorthodox method of demolition they took off the roof leaving it exposed to the elements for 8 years. After the nave had degraded to a ruinous state they blew what remained of it up. They then employed Henry Rose to build a Gothick (not a misspelling) nave which so horrified people no records of its design were kept and it was demolished in less than a century. In 1890 the present nave was completed by Sir Arthur Bloomfield, as a close copy to what once stood for hundreds of years in an early English style. 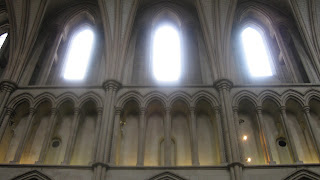 The building has fragments from each period of medieval architecture in England. In the wall of the north transept are fragments of the original Norman monastery. The church is dominated by the Early English style which is evident in the chancel and the retro-quire (and the old nave). The two most distinguishing features of the church are the early English retro-quire and the Triforium (pictured left- {the arcade of arches underneath the windows}). It also has some of the Decorated style which is evident in the south transept. The church also displays the late Gothic style of Perpendicular in the tower which was built around 1400 after rebuilding from a small fire in the 1390's. Also in the church is the Victorian Gothic revival style in the nave and extensions on the north and south transepts. Although it does not have the character and age of the medieval fabric the rebuilding on the inside at least has been generally sympathetic. On the outside however, the building has been much more altered, most obviously with the black flit covering which was added in the late nineteenth century restoration.
Posted by Nostalgia at 09:27 No comments:

Email ThisBlogThis!Share to TwitterShare to FacebookShare to Pinterest
Labels: Cathedrals and Abbeys, south of the river
Newer Posts Older Posts Home
Subscribe to: Posts (Atom)
In this Blog the term 'medieval' has been used to cover the period from 1066 to 1666.