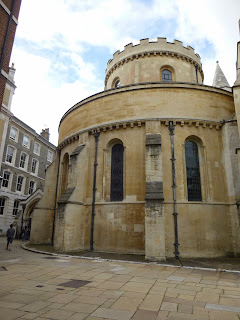 The Temple church is one of the oldest in London and has a truly fascinating history. Built from 1160 it displays the characteristics of transitional style of architecture, the period between the styles of Norman and early English. The church was taken over by lawyers in later medieval times when they moved to the temple and has remained in their care since as a private chapel. The church has been restored many times, most recently after the war after when it experiencing much damage along with much of the temple district. The temple district is gated which means access to the church can sometimes be difficult (always best to check opening times) therefore this post which is more focused on photographs will take a tour of the buildings in an attempts to capture the feel of the building for those unable to visit. 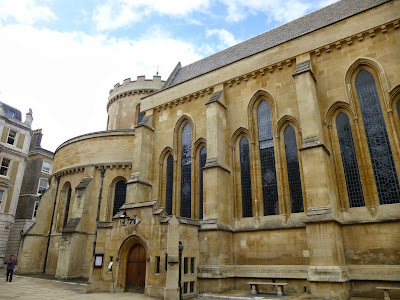 Starting from the front the contrast in styles between the chancel which is Early English and the nave which is mostly Norman. It should first be brought to the attention of the visitor the unconventional layout of the church in which the nave is round with a rectangle chancel with no transepts, it is one of only a handful of examples in England of the round churches which were based on the ones found in the holy land. When putting a date (style of building) to a building the style of window is often one of most
obvious places to start, in this building it is interesting as when construction started (on the nave) it was primarily in the Norman style with small rounded windows, but by the time they finished it is primarily in the Early English style (the classic Early English three pointed arches (large central window with one either side)). Inside the nave there is evidence for the transitional style with the introduction of the pointed Gothic arch, but we shall get to that later. 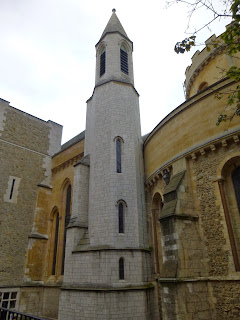 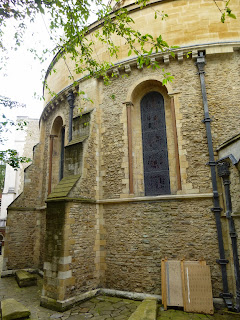 Before we enter the church via the west door into the nave some other parts of interest on the outside of the church should be inspected. On the other side of the nave stone rubble is used rather than the smart finely cut stone as this was not intended to be on display, indeed often these areas would have been obscured by buildings which were built right up to the church, these were often only demolished by the Victorians during their notorious restorations. Another point of interest is the Victorian bell tower which is almost completely invisible from many views of the church, and a good thing too as its an insensitive and ugly addition, not even using similar stone. 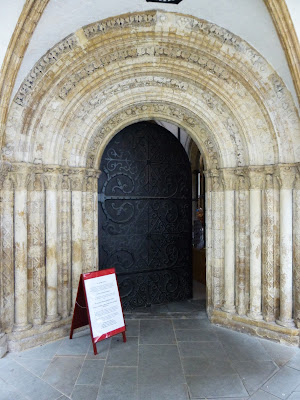 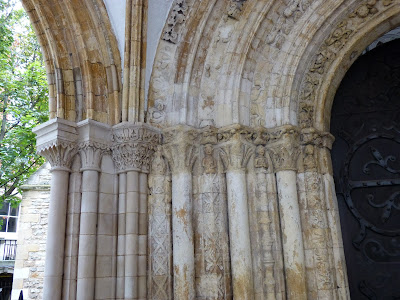 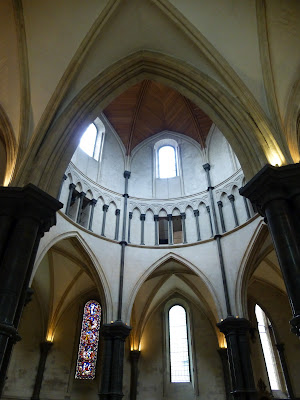 The view when entering the church by the west door is being circular 'round' and the chancel being straight. there are no transects and no central tower. 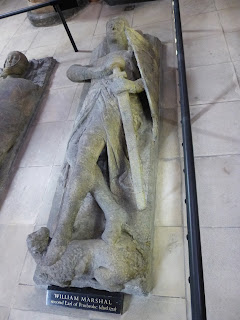 On the floor of the nave are medieval tombs to the knights who fought in the holy land. They appear ravaged by time and history, however this appearance is relatively new as they were the casualty of a direct hit during the blitz, in some cases they have had to be reassembled as they were damaged by the collapse of the roof. 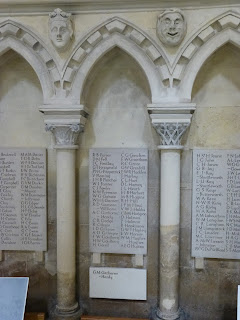 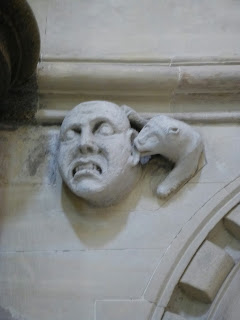 Running the along the wall of the nave is evidence of the transitional style, pointed arches over the seating. The sculptured heads between each arch along the nave are an interesting feature but not original as most were replaced during the restoration by Robert Smirke in 1828 who among other things replaced the heads along the wall of the round. It is dubiously claimed that they were all copied from the originals, however how closely is of course unknown. We will now proceed to the chancel. 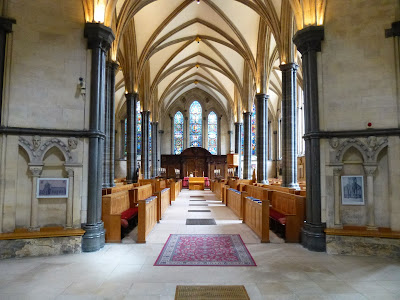 The chancel was added after the nave from 1220 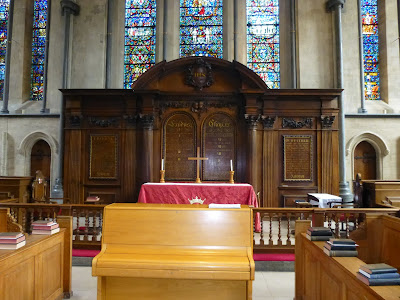 The alter piece is one of the few pieces of furniture from Wrens restoration to survive the blitz. This dates from the 1680's restoration by Wren who added furnishings and white washed the walls. 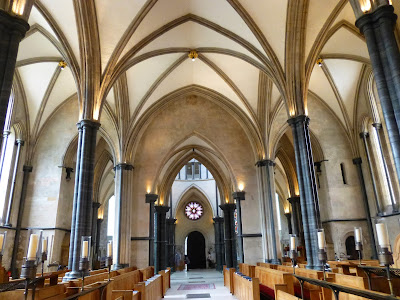 The Early English windows in the chancel and the height of the roof supported on slim Purbeck marble columns gives the church a generous light. Much of the furniture is modern due to extensive war damage.

In its long history of restorations the most devastating and extensive restoration was in 1840 by Sidney Smirke and Decimus Burton. This restoration was described as of the most 'violent kind' and making the 'fabric (of the church) entirely new' in old London churches (by Elizabeth and Wayland young). Despite all the restorations and the war damage the church does still retain its character and is still a stimulating place to visit.
Posted by Nostalgia at 12:22 No comments:

Email ThisBlogThis!Share to TwitterShare to FacebookShare to Pinterest
Labels: churches, photographic post
Newer Posts Older Posts Home
Subscribe to: Posts (Atom)
In this Blog the term 'medieval' has been used to cover the period from 1066 to 1666.