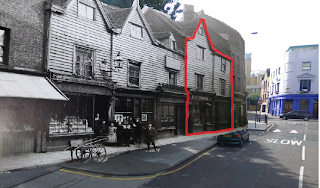 This row of seventeenth century houses in east end on Three colt street represent the picturesque appearance of many London's streets at turn of the last century.


The houses were of a basic design with weatherboarding and three of them with  gables. Weatherboarding was a common form of cladding which protected brickwork or a less resilient material from erosion. Each building had a shop on the ground floor and accommodation on the upper floors. For most of their lives they would have been overlooked as architecturally insignificant and were similar to many other buildings in London, once being a common occurrence. It is only now after the demolition of most of these buildings that they seem to be significant, no house such as these with weatherboarding and very few of the same age have survived. They were seen as slums or just old and withered in their time today if they had survived today they would have been conserved and appreciated for their likeness for how much they represented pre-modern London. These buildings which lasted for centuries would no doubt outlived their 1950's replacements if they hadn't been lost.

Using evidence from old maps it seems the two buildings highlighted in  red were demolished some time between 1916 and 1919. The other three survived for a few more years as in 1923 there is photographic evidence (bottom) showing the remaining three still  standing although in a extreme state of decay in which two were derelict. Between 1923 and 1947 the remaining buildings disappear from the map. I can only speculate how they were lost as they seemed insignificant and unworthy of recording. They could have been damaged in the war, although its more likely they fell down or were demolished as a dangerous building. From a map of 1947 it can be seen that Lance street was extended, passing through the site of the houses to join up with the street Ropemakers fields. Currently on the site is Padstow house, a bleak 1950's housing block. Lance street no longer exists nor does ropemakers fields opposite the houses, both have been swallowed up by roadless large post-war housing  estates. 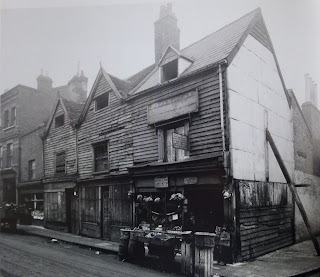 The image above is superimposed on current location with the older image dating to 1900. The older image was used on the front cover of Phillip Davies's 'Lost London'. The image left © shows the row in a advanced state of decay in 1923. They appear to be in a dire state with no windows.
Posted by Nostalgia at 16:20