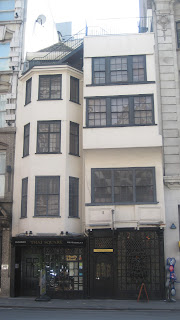 These two adjacent timber framed buildings in the heart of London in Fleet Street are curious survivors of destruction and redevelopment London has seen. The two buildings must have come under joint ownership at some point as they are two separate buildings which have been restored in similar fashion around the nineteenth century. Most people wouldn't give these buildings a second glance, not being as impressive and as obviously old as the Inner temple gateway slightly further down the street.

The first, 229 fleet street (right on image) was constructed in the early seventeenth century in 1625. It is an elegant medieval townhouse built on four stories with a projecting jetty from the second floor fitted with sash windows, probably inserted when altered in the nineteenth century. The ground floor is much altered with the addition of Victorian shop front. Above the door there is a small plaque commemorating its rare survivor of the great fire of London. The building is listed 2* by English heritage for its age and the rare survival of a jetty.

230 fleet street (left on image) is a late seventeenth century townhouse with ground floor shop. The building has a full width bay with sash windows which follows the building from the first floor upwards. Although in my view less interesting than 229, this building is listed as Grade 1 by English heritage as a building of the high importance.

These two buildings are the only survivors from the medieval townhouses which would have once lined Fleet street and are also perhaps the only survivors of London's once plentiful collection of timber framed seventeenth century townhouses. These two managed to survive the Victorian and Edwardian schemes of clearance which destroyed buildings of a similar antiquity and style in the area in streets such as Wych street.

If you want to learn more about fleet street and its development why not take a walking tour by visiting: http://www.unrealcityaudio.co.uk
Posted by Nostalgia at 22:24 1 comment:

Email ThisBlogThis!Share to TwitterShare to FacebookShare to Pinterest
Labels: Domestic Buildings
Newer Posts Older Posts Home
Subscribe to: Posts (Atom)
In this Blog the term 'medieval' has been used to cover the period from 1066 to 1666.