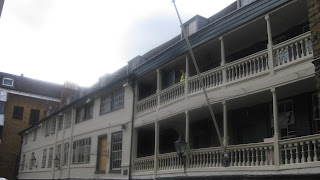 The George inn is one of London’s many relics from its medieval past. Although built in the late seventeenth century it is similar in design and function to many Inns which of the medieval city. The George Inn is tucked away off Borough high street south of the river. It was rebuilt in 1676 after a fire destroyed much of the south bank. It remains now the last galleried coaching Inn in London and only one of two coaching inns left. It would have originally stood in an area with many similar Inns on the approach to London however over the years they have been slowly removed mostly by the railway companies who also almost destroyed the George. Although the Inn was not lost like many others, two of the Inns sides and much of the back of the building were taken down to build a goods warehouse leaving only the south side (shown above left) of the inn as authentic.

The building is listed grade one by English heritage as it is a rare example of the old coaching inns which would have once been common through-out London. The George inn is almost unique in having managed to escape the bulldozers which flattened most of the cities coaching inns. The inn is now maintained and conserved by the National Trust, although it is far from a museum with a lively pub on the ground floor. The best example of a London coaching Inn was the Oxford arms which was sadly demolished in the Victorian era.
Posted by Nostalgia at 15:44 No comments:

Email ThisBlogThis!Share to TwitterShare to FacebookShare to Pinterest
Labels: Inns of london, south of the river 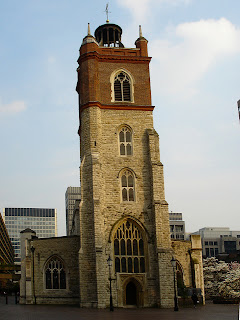 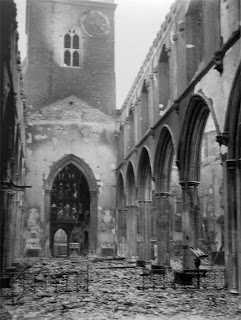 The church of St Giles Cripplegate was first built in 1090 and was dedicated to St Giles the patron saint of Blacksmiths and cripples. The part of the name 'Cripplegate' existed before the church (it was Anglo-Saxon). The site stood just outside the walls and Cripplegate (a large section of wall is visible to the south of the church) in a marshy area known as Moorfields. It was rebuilt in 1390 in a perpendicular style but suffered a major fire in 1545, although after the fire it was rebuilt much as it was before. The church was saved from destruction in the great fire by the city walls which prevented it from spreading further northwards. The top of the tower was rebuilt in brick in 1682 which was also when the wooden cupola was added (although the present one is modern). During the Georgian era as the surrounding area became more habitable and the residents more affluent the church was gentrified with the addition of pews and galleries. In the Victorian era as with many other churches the building underwent a large restoration project. Much was done to the church, the Georgian alterations were torn out and the building was enriched with battlements and a rag stone facing giving the church a more medieval appearance.

The church was gutted by the bombing during the Second World War which decimated the surrounding area. Until the war the church was surrounded with a maze of lanes and houses, after the war much was destroyed and those which were left were demolished for the new Barbican estate. The church now stands marooned in the centre of the Barbican estate. The image left © shows the destruction war brought in the nave.

The church was restored relatively sympathetically by Geoffrey Allen in the 1950's and was reopened along with the opening of the Barbican complex. The Image bottom left shows a modern drawing of the church. The image bottom right ©  shows the church within its original context with houses pressed up against it. 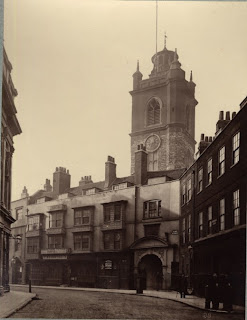 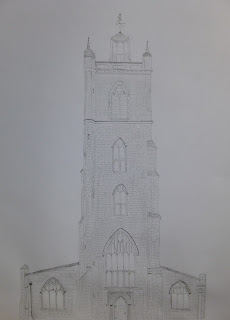 Posted by Nostalgia at 19:58 No comments:

Email ThisBlogThis!Share to TwitterShare to FacebookShare to Pinterest
Labels: churches
Newer Posts Older Posts Home
Subscribe to: Posts (Atom)
In this Blog the term 'medieval' has been used to cover the period from 1066 to 1666.