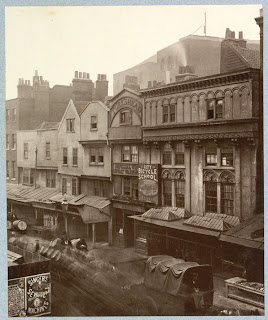 Aldgate high street was once a street leading to one of the eight gates of London and was thus a important travelling route in and out of the city. Due to this the street developed a collection of grand timber framed buildings, of which many used as pubs and inns for travellers. Most of the buildings on the road dated from the seventeenth century, although there were too some of the mid sixteenth century. The great fire of London left the area untouched, it stopped only 50 meters from the street which allowed many of these buildings to survive until the Victorian era.

The image left shows the south side of the street showing an area known as 'the shambles'. One of the most interesting set of buildings on the high street (in my personal opinion) are the two buildings on the right of the photograph. Unlike many ordinary buildings of a similar date (look at those to the left) they seem to be elaborately carved with some interesting fine detail on the woodwork. The work could of course be entirely fake, perhaps a Victorian concoction, but from the photograph there is really no way of knowing. If they are original then it may suggest they were occupied by a wealthier owner and perhaps they were up to their demolition as they look better kept than others in the photograph. 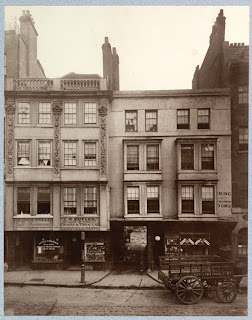 The photograph left shows the Saracen's Head Inn which was also on south side of Aldgate (on the corner with Jewry street) with a name taken from crusades. However, the inn is not as old as might be suspected as there is only evidence for its existence after 1721. The building itself on the other hand is older, perhaps mid-late seventeenth century with rectangular bays, quite similar in design to the Hoop and grapes pub. Through the passage which can be glimpsed when you look to ground level (under the left bay) led to 'poor' Jewry lane. By 1868 the Inn had gone and by 1909 the building was being used as a restaurant (photograph taken in 1880) the building was demolished sometime after 1909. It stood on what is today Jewry street (just off the high street) and there is a plaque marking the site of Saracens head yard. 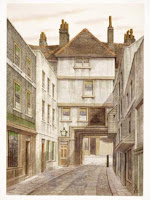 On the North side of Street were more timber framed buildings, most of them were pubs and inns. Most of the pubs had a coaching Inn attached and a yard to the rear. They were built to serve travellers as accommodation when visiting the city, the street was on route to Aldgate gate (an exit & entrance to the city) hence the large number of coaching inns. The pubs had a variety of names, there was the Black horse pub as well as the Bull yard (image shown left), the strangest name perhaps was the Three nuns yard. The Bull yard left is typical of most of these inns, a pub at the front with a passageway through the ground floor usually leading to accommodation in the lane at the rear. The image was drawn in 1890, and the building must have survived until the late Victorian era, through the passage is Aldgate high street.

The late Victorian period changed the look of Aldgate drastically. In less than five years most of these buildings mentioned were destroyed. They were demolished as they stood in the way of progress, more specifically the development of London's railway infrastructure. Much of the north side was demolished first to build Aldgate station in 1876, although some of the pubs survived (e.g Bull inn) but they were too demolished later for offices. Most of the south side was then demolished in 1880 to build the south bound extension of the Metropolitan railway to tower hill which was completed in 1882. Today much of the street feels drained of character with many empty gaps on the south side and large modern office buildings on the north. Quite a contrast to the medieval buildings which stood compactly on small pieces of land. 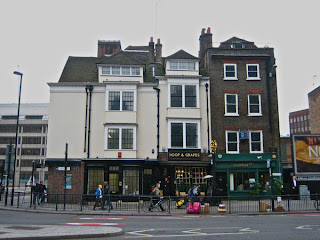 Although much has gone from the medieval built past, there is a small row of buildings still remaining huddled together on a large junction at the east end of the street. The Hoop and Grapes and two adjacent buildings make a row of Sixteenth century timber framed survivors of the destruction of the street. The pub, the Hoop and Grapes was built around 1593 with the other two buildings probably from a similar period some time at the end of the sixteenth century. The building to the right was refaced in the eighteenth century in brick but behind the facade is a sixteenth century core which still survives. There is evidence for the buildings age in the gable on the roof above the parapet. Underneath the pub are a impressive set of thirteenth century cellars from an earlier building on the site.

The pub has recently reopened after refurbishment, although not as drastic as when it and next door left were completely restored in the 1980's. The 1980's restoration by Lewisham based contractors Wynn involved the very expensive operation of propping up the fragile original timber frame with a specially designed steel frame, at a cost £1.2m. The timber frame was weak and the building had sheared sideways by 18inches, it was in danger of impending collapse and was served a dangerous structure notice. The timber is no longer a structural element to the building, it was stripped back to frame and decaying timbers were replaced with the building being rebuilt to the original design. This restoration has saved the building and the final medieval composition of the street.


There was once a forth building completing the composition which had a gable and a double height bay window. It was demolished sometime after 1908 and stood next to the right brick building where there is now a advertising board on a empty site.
Posted by Nostalgia at 17:21